Many once thought copper cabling would never support speeds above 1 Gig, but Cat 6A (and Cat 7) has proven that wrong and is allowing copper cabling to live on.

There has been much debate about Cat 6A unshielded twisted pair (UTP) vs. Cat 6A shielded twisted pair (STP) and which is the better option for supporting 10 Gig. Both solutions have their place, and this article aims to provide some key information that will help our customers make an informed decision.

In June of 2006, the IEEE released the 802.3an 10GBASE-T standard, which specifies 10Gbs data transmission over four-pair copper cabling. Following that standard, the Telecommunications Industry Association (TIA) began work on transmission performance specifications for the cabling. In February 2008, they published TIA Standard 568-B.2-10: Transmission Performance Specifications for 4-Pair 100 Ohm Augmented Category 6 Cabling. The new Cat 6A standard extends the frequency of Cat 6A cables to 500 MHz and includes specifications for a new performance parameter known as Alien Crosstalk (ANEXT). Category 6A cables are fully backward compatible with all the previous categories, including Category 6 and 5e.

ANEXT is crosstalk that occurs between adjacent cables and connecting hardware. While not a problem at the lower frequencies of Cat 5e and Cat 6 cabling, the higher frequency signals of Cat 6A makes ANEXT the limiting noise source for these systems. Active equipment can effectively reduce near-end and far-end crosstalk between pairs in a cable using cancellation technology that relies on crosstalk coming from a known source. However, with ANEXT, the source is unknown and cannot be cancelled out by the equipment.

In order to mitigate ANEXT in a UTP copper cabling system, cabling vendors have had to develop unique cable and connectivity designs under stringent specifications. Because ANEXT is increased when adjacent cables are close proximity, it is typically recommended to let cables lay loosely in pathways versus tight, twisted bundles when deploying UTP Cat 6A systems. Another option is the use of STP cabling components where the shield that surrounds the pairs isolates adjacent cables from each other to eliminate ANEXT. Fortunately, LANSHACK offers both UTP and STP Cat 6A options. Following is some key information needed to make the best choice for each installation.

While Cat 6A UTP cabling and connectivity components support 10 Gigabit, STP cabling systems are a viable alternative for running 10 Gig over copper. As shown in the graphic below, the shield in our STP plenum and riser-rated cable does an excellent job of eliminating ANEXT, providing an improvement in ANEXT performance over Cat 6A UTP.

In addition, the shield surrounding the pairs in the STP cable helps prevents electromagnetic and radiofrequency interference (EMI/RFI) from coupling onto twisted pairs. This can help to eliminate the effects of noise from sources like machinery, generators, or medical imaging equipment, making STP systems an ideal choice for industrial environments and healthcare facilities.

There are many misconceptions in the industry surrounding STP cabling, including installation, bonding and grounding, and overall cost.?

The belief that shielded cabling systems take longer to install has been around for many years and is based on older-style shielded systems that required extra steps during installation. Many of todays shielded components include die-cast metal jacks that no longer require special bonding of the shield, making the installation time comparable for both UTP and STP. STP systems really only require a little extra time to separate the overall shield from the cable. In addition, STP systems do not typically need to be tested for ANEXT, which can be a fairly time-consuming process with UTP.

The belief that bonding and grounding is more complex and time consuming with STP systems is also a myth that has permeated the industry. However, STP systems really require just the one additional step of bonding the shielded patch panel to the rack using a 6 AWG bonding conductor in exactly the same way that other equipment is bonded. The shield of the STP cable is bonded to the patch panel during termination, and the 6 AWG bonding conductor simply maintains the continuity of that shield to ground because the rack is bonded to the telecommunications rooms grounding busbar. Many also believe that bonding shielded systems only at the telecommunications room and not at the workstation end of a link will create an antenna effect. However, only one ground connection is required for proper performance, and most STP systems have ground connections at the computer, at the patch panel, and another at the networking equipment. Even if a battery-powered laptop is used at the workstation, there is still a connection to ground in the closet and no problems with performance. The graphic below demonstrates bonding and grounding for STP systems.

While shielded components do cost slightly more than UTP, the increased performance and reduced testing time can ultimately lower the total cost of ownership. It has been determined that next generation cabling systems that aim to perform beyond 10 Gbs transmission speeds will require shielded cabling and components, which makes STP systems more future proofed than UTP. The result is similar lifetime costs for both STP and UTP systems.

We hope that you have found this article helpful. We here at LANshack.com sell just about everything you will need to do an installation.
We hope that you will consider us when purchasing your supplies. Thank you for visiting our website. 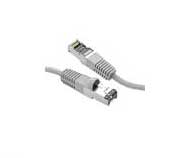