In this category we offer custom MTP trunk assemblies, MTP fanout assemblies, and MTP cassettes in multimode om3 and om4, and singlemode.  We offer these assemblies in the following jacket types: indoor plenum, indoor/outdoor plenum rated, outdoor (OSP) loose tube, and outdoor armored direct burial rated.  We also offer both our MTP trunk assemblies and MTP fanout assemblies with microarmor jacket.  All of our MTP trunk and fanout assemblies are custom made to order is the usa and include corning glass and genuine us conec connectors.  Our manufacturing process includes strict quality control and come fully tested with a test report.  Our MTP cassettes are premium quality and include low loss and genuine us conec connectors.  We also offer high density MPO cassettes for high strand count installations that require minimal rack space. 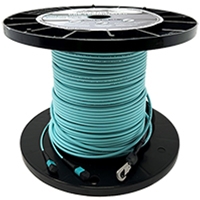 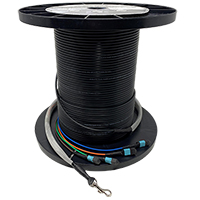 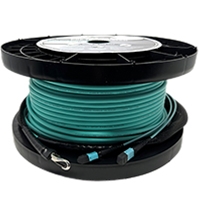 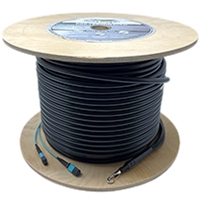 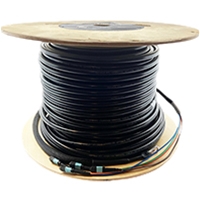 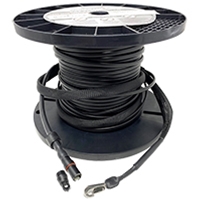 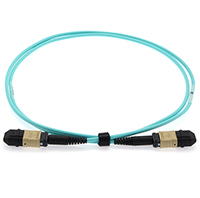 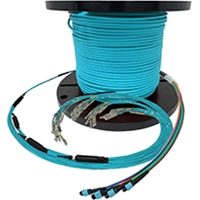 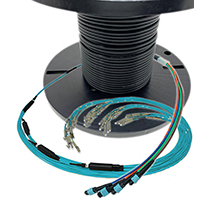 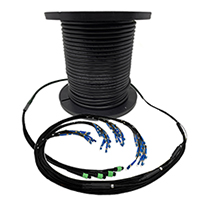 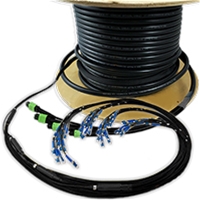 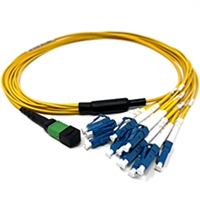 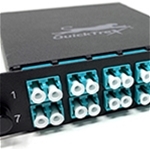 Optical fiber networks require two fibers to make a complete circuit. The matching of the transmit Tx signal to the receive Rx equipment is referred to as polarity, and a transmit and receive side on optical transceivers usually use a duplex fiber connector to maintain the polarity. On most cabling systems, maintaining polarity just requires that the A side of one connector pair matches the B side of the other connector pair, with fiber connectors such as ST, LC, SC, and MTRJ.

MTP/MPO high density network design requires its own set of rules regarding maintaining polarity throughout the link. These three polarity methods are commonly referred to as Method A, Method B, and Method C, and we will discuss the difference further here. Come see why our MTP & MPO cables, cassettes, and components are second to none in the industry.

Method A – Straight Through

The transmit/receive flip must happen with the patch cords either at the beginning or end of the link to ensure proper transceiver polarity.

*Note- method B is not compatible with our standard QuickTrex cassettes.

Method C and Method A are very similar, with the main difference being the flipping of the patch cords in the link. This method uses key up key down, and the polarity flip takes place within the cable itself. Each adjacent pairs of fiber at one end are flipped at the other end. So, Fiber 1 and Fiber 2 becomes Fiber 2 and Fiber 1 at the other end, and so on.

This circuit is completed by using straight patch cords at the beginning and end of the link.

Although most people in the industry refer to this connector as MTP, it is actually correct to also call it MPO. The term MTP is a registered trademark of USConec and identifies their specific brand of the MPO-style connector.

The name MPO stands for Multifiber Push On, and typically consists of a 12 strand Ribbon Fiber that is terminated to a single compact push on connector. Our MTP & MPO cables, cassettes, components and connector types are available online now.

The pins on the MTP/MPO connector signifies that is it a Male connector.

The white dot on the right, signifies position 1 on the MTP pinout.

The raised tab on the top of the connector signifies it is in the key up position.

The lack of pins on the MTP/MPO connector signifies that it is a Female connector.

The white dot on the right, signifies position 1 on the MTP pinout.

The raised tab on the top of the connector signifies it is in the key up position.

There are three popular MTP strand counts available on the market today.

The MTP 8 Connector utilizes 8 of the 12 fibers in a standard 12 Fiber Connector. QSFP applications use the outer four fiber spots (1 – 4 and 8-12) of the MTP connector with four fibers used to transmit and four to receive. Method B is the most commonly used polarity method for a MTP 8.

The MTP 12 Connector is the most popular choice for a MTP connector and is recognized as industry standard. Method A, B, and C are available in a MTP 12. Method A is the recommended polarity method.

The MTP 24 is the most cost effective and high-density solution for MTP, as this connector is able to harness 24 fiber strands in one connector. There are various polarity options for MTP 24, but Method A is recommended, and is standard on our QuickTreX assemblies.

When connecting, or mating, two MTP connectors together, you will need an MTP adapter to accomplish this. The male connector should be in the key up position, and the female in the key down position.

Maintaining proper polarity across your network is also applicable when choosing a cassette. Cassettes come in a few different forms: 12 Fiber (1 x 12), 24 Fiber (2 x 12), and 24 Fiber (1 x 24). It is especially important to make sure the MTP configuration on your MTP Trunk Assembly or MTP Fanout Assembly is compatible with the MTP Cassette you choose.

For Method A or Method C Polarity:

Method-A cassettes make a key up to key down connection between the internal MTP connector and the MTP cable connector.

The cassettes will already be in a key up position, and when plugging in your MTP connector it needs to be in the key down position.

For Method B Polarity:

Method-B cassettes make a key up to key up, key down to key down connection. For these cables to perform properly, one of the cassettes would need to be inverted internally for Fiber 12 is mated with Fiber 1 at the end of the link. This method requires two different cassettes with special labeling to identify which one is flipped.

One cassette will be in the key up position, with the MTP cable also being key up.

One cassette will be in the key down position, with the MTP cable also being key down.

Method B cassettes are not recommended for Singlemode APC fiber applications, because the angles of the mating connectors do not line up properly with this configuration and are not sufficient for low loss applications.

*QuickTreX cassettes support a method A/C configuration, and are not compatible with Method B.

Method B in Parallel Optics

Method B polarity is particularly useful in regard to 40G parallel optic applications, and direct switch to switch connectivity. Method B MTP cables are also referred to as a QSFP/QSFP+ cable or direct attach 40GBASE-SR4, 40GBASE-PLR4 or 40GBASE-PLRL4. This orientation is useful because instead of an alternating Tx to Rx duplex pattern, 40G parallel optics utilizes the flipped Pin 1 to Pin 12, Pin 12 to Pin 1 pinout.

Female to Female type B trunk cables can also be used for a direct switch to switch connectivity going directly into 40G transceivers, or with an MTP adapter, used to connect a patch panel to a QSFP+ transceiver.

We have talked about the different types of MTP polarities, and how to properly mate two MTP connectors. The last step in a standard MTP application is breaking out the high-density fiber strands into standard fiber connectors.

If you are using a cassette, then you will need standard fiber jumper cables to complete the polarity methodology. If you are using an adapter, then you will be connecting the MTP trunk cable to an MTP Fanout Assembly which will have standard fiber connector fanouts. The MTP Fanout Builder will go into more depth on configuration there, so let’s focus on a MTP cassette method with patch cables.

There are two types of duplex fiber patch cables as defined in the TIA standard: A to A, and A to B. Maintaining proper polarity requires the B Tx signal to connect to the A Rx signal.

A to B patch cables are also known as “straight-through”

A to A patch cables are also known as “flipped”

Patch cords made with individual single fiber connectors at each end allow the flexibility for connections to be “swapped” when a polarity reversal is required. Our QuickTreX Custom USA fiber optic patch cables will provide the ability to be swapped. 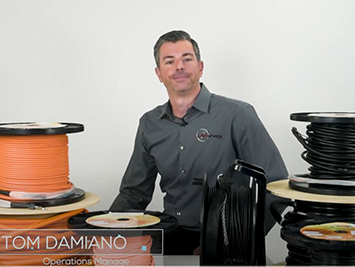 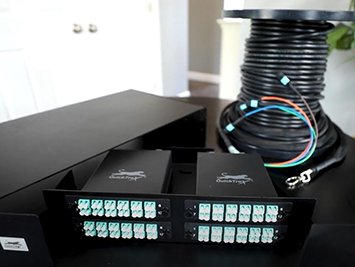 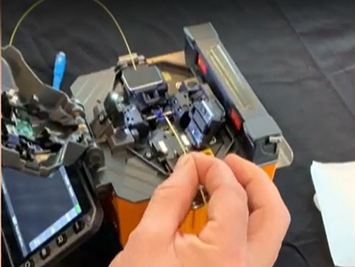