We no longer offer innerduct as solution for protecting your fiber, as the cost of the material and the cost of extra
installation is prohibitive. Using an armored fiber is the recommened QuickTreX solution.

When using a conduit is not feasible and you have several different transitions throughout your fiber optic run, then choosing armored cable becomes a likely choice. It not only can save you time and money but can provide a stronger protection of your fiber optic assembly. There are several factors involved in making a decision to go with armored fiber optic cabling. I’ve seen and heard lots of damage occurring from rodents chewing through fiber optic cabling. Chewing on cabling for them is often comparable to a dog’s chew toy but with very costly ramifications. If this cable is chewed somewhere in the middle of a long run and and need to find that break in the fiber you will need expensive test equipment that involves a fiber optic fault locator and launch box. This equipment usually runs in the thousands of dollars. Most technicians will have this equipment, but field terminations can usually cost just as much as your pre-terminated fiber optic assembly. Then, if it’s found that the cable is unrepairable this cable may have to be pulled back out of the conduit and a new assembly will have to be installed. Just the labor involved with this can often surpass the cost of the cable. All of this sound like a nightmare but it often gets worse when a building or company’s network is out. A down network can jack the cost of the damaged cable up real fast. There are also many other factors to consider such as an industrial environment where the cable can be psychically damaged by equipment or other objects that may hit it.

The most common type of armored fiber optic assemblies is interlocking armor. This type of armor is extremely rigged and will absolutely provide a superior metallic rodent-proof protection to your cable but can be difficult to pull and is very heavy especially with longer lengths. It’s also not as flexible as typical distribution cable but that fact that it’s armored often outweighs these inconvenience’s. A new technology has recently hit the market. It’s called MicorArmor™ and utilized a metal spiraling technology. As a result this cable is often 65% smaller in diameter and weighs up to 75% less than common interlocking armor. Because of the spiraling technology, it is significantly more flexible which makes pulling around bends and in tight spaces much easier. The metal used is also stainless steel so if the jacket get cut and it’s exposed to moisture it will not rust.

We now offer this MicroArmor™ fiber optic cabling for our pre-terminated fiber optic assemblies and can make it in OM1, OM3, OM4, and Singlemode fiber. We also offer in indoor, indoor/outdoor, and outdoor. All of the indoor, indoor/outdoor, and some of the outside (OSP) is plenum rated. This is extremely valuable since you can transition from a non-plenum such as outside to inside ductwork in a building without need to come into a termination box and transition to a different assembly. It also saves the loss that often can occur with several couplings throughout a run.

We still offer all other types of jackets but if the need should arise armored fiber optic cabling, you may want to consider the benefits of MicroArmor™. 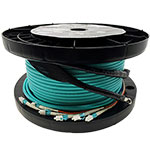